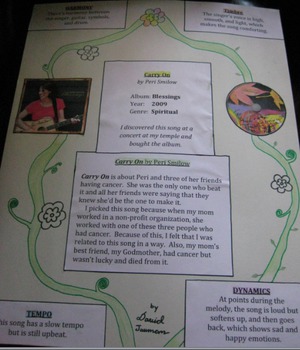 Peri recently received an amazing note from fan Laurie Skop of NJ!  She wrote that one of Peri's songs moved her soon-to-become-Bar Mitzvah son to base a school music project on her song.  She shared the poster that her son created based on Peri's song CARRY ON!  Then she sent her son David's explanation of the project.  Amazing!  Thank you David and Laurie.  Here's what he wrote:

I did this project for my music class during school. It was our end of cycle (18 days in a class) project that would make up most of our final grade. The topic was your favorite song or one you relate to well. Then we had to tell about the song, where you discovered it, include some photos, figure out some elements of music that the song uses, and make a poster out of it. I chose Carry On, by Peri Smilow. For the elements of music, I chose harmony, tempo, dynamics, and timbre. You can probably see the all the typed work on my poster so I really wanted to point out the symbolism in the background. You should be able to see four flowers on a vine, three being white and one being very colorful. The three white flowers represent Peri’s three friends who have sadly passed away that she mentions in her song. The colorful one represents Peri because it is still alive, healthy, and beautiful. The vine shows that Peri and her friends are all still connected even though those three friends have passed. Those are all the things I put on my poster, and my music teacher, Mr. Shepard, though it was fantastic. Thank you, Peri Smilow!